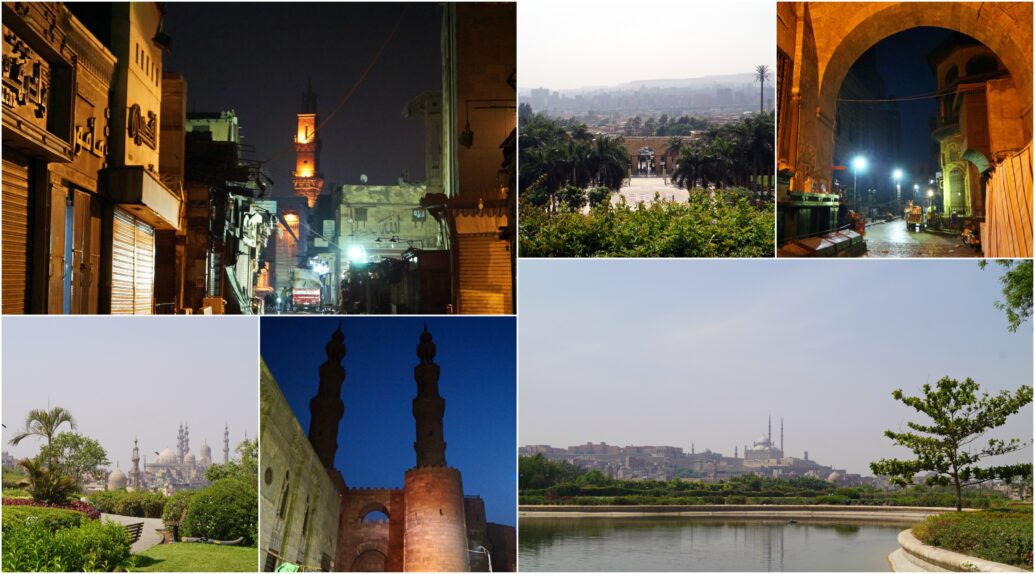 Old Cairo – the city of a thousand minarets

By: polegytravels
In: Africa, Egypt, Travels

We have been to Cairo so many times that I would be difficult to count. However this year we finally went to see the Old Cairo. It’s the oldest part of the city which contains Coptic, Islamic and Jewish monuments. The novel “Palace Walk” which is set in the Islamic part of Old Cairo inspired us to make this trip.

In spite of being tired after the night flight, we visit Cairo at 5 am. Thanks to that we avoid crowd and on the other side we see that this city never sleeps. The cafes are open, people go to the mosques, sellers gather in a nearby souk. First we go to see the Al-Hussein Mosque, the same one that the character of Nagib Mahfouz’s novel loved to visit. At night with the lights it’s looks charming.

From the mosque we walk through Khan el-Khalili souk where merchants put out their goods. During the day it’s impossible to pass the place. It’s a whole merchant district with shops, restaurants and coffee shops. One of the cafes was called Nagib Mahfouz to honor the Egyptian Nobel prize laureate. The Old Cairo is a place where not only the famous trilogy of the paper writer was set but also novels like “Midaq Alley” and “Khan al-Khalili” which describe the places located in the merchant district. Many places known from the novels don’t exist anymore or their locations were changed for the purpose of creating literally fiction. That’s the reason why it’s impossible to find the most famous street described by Mahfouz: Bayn al-Qasrayn. It’s known that it was one of the streets in Gamaliya district near Al Darb al-Ahmar.

Al Darb al-Ahmar is another market district we visit. We pass Bab Zuweila, one of three remaining gates in the walls of the Old Cairo. On the left side behind the gate there is Mosque of Sutan al-Muayyad from 15th century. Its construction has a really interesting history. At first in the same place there was a prison and the future Sultan al-Muayyad was a prisoner there. He suffered so much from fleas and lice that he promised to transform the prison into a saint place once he comes to power. He kept his word and when he became a sultan he constructed the mosque.

On the right side there is Sabil-Kuttab of Nafisa al-Bayda from 1796. Sabil was a commercial water supply building. Above Babil there was Kuttab, Quranic School. Nafisa al-Bayda was first a slave who later married Murad Bey, a wealthy man who became the leader of the resistance against Napoleon Bonaparte invasion. She helped her husband acting as an intermediate between him and Napoleon. She is a symbol of women’s participation in political life of those days. Nafisa was an intelligent woman who was also sucessuful in business life. Next to Sabil-Kuttab there is her Wikala, a commercial market where merchants stored and traded their goods. Until now only the façade of Wikala was preserved. The interesting thing is that Sabil-Kuttab is located between Al Moataz Lidn Allah street which goes through Bab Zuweila and Al Sokarya street known from the trilogy of Nagib Mahfouz.

Police prevents us from visiting more of Old Cairo. At 5 am we looked so suspicious that someone called the police. They were surprised that we were coming back from the airport in the morning and we wanted to visit Old Cairo. They believed when they saw our luggage in the car. Everything seemed to be fine but still we should leave because “it’s not a proper place”. We lost all the pleasure of sightseeing this part of the city anyway.

After that we went to the last place on our list: Al-Azhar Park. In 1984 Aga Khan IV visited Cairo and from his hotel he saw mounts of rubbish amassed for centuries. He decided to intervene and offered the creation of the park. The area was cleaned and the construction began. The project cost 30 million dollars. During the excavation they also found a historic Ayyubid Wall with the depth of 15 meters and 1.5 kilometers length. Nowadays the park is the greenest place in whole Cairo.

With no power for more sightseeing we look at the Cairo Citadel, called also Saladin Citadel of Cairo, from the hill in the park. We have a perfect view on the Mosque of Muhammad Ali, or Alabaster Mosque, which is a part of the Citadel.

Al-Azhar Park is an ideal place where you can rest after visiting and hide from the sun. What’s more, from the hill you can see the panorama of the whole city. Then it’s not difficult to understand why Cairo is called the city of a thousand minarets.