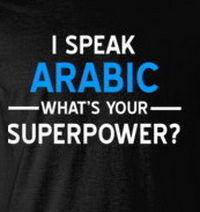 Language mistakes: how can you tell your Egyptian mother-in-law that she can’t cook?

Some time ago I wrote about the most useful words in Arabic. Now it’s time to tell you about language mistakes you can easily make in this language and at the same time about misunderstandings that may happen to Arabic speaking people.

I will start with myself. When I stayed in Egypt for longer time, I tried to learn new words in Arabic in each and every possible way. I used to ask how to say particular words, how to name some objects etc. Later I tried to create my own, short sentences. It wasn’t perfect but everyone around encouraged me to keep on trying. What’s more, mostly they could even understand what I wanted to say! I believed in my knowledge and I tried to speak without help 🙂

So, one day my sister-in-law baked a cake. It was cousin’s birthday, it was supposed to be a surprise so there was also a cake. Chocolate cake with banana! Yummy! We are eating, me too,  it’s delicious 🙂 Suddenly my sister-in-law asks me: “Helwa?”. I learnt before that this word means  “sweet” so quickly I formed a sentence I had learnt before: “Mesh helwa” (It’s not sweet). It was a chocolate cake but it wasn’t too sweet otherwise I wouldn’t have eaten it. Everyone looked at me in a strange way and they started to laugh. I didn’t really know what was going on but I thought it was because of my pronunciation. It was very common that people laughed because they found my pronunciation funny 😛 Ok, I will survive and let them laugh, I’d better eat a piece of cake 😛

The next part of the party just worsened my situation. This time my mother-in-law prepared a dessert: rice with milk. It’s a very popular sweet in Egypt so of course I had to try it. I tried and the same question appeared: “Helwa?” so I answered the same thing, that it was not sweet. I started to ask myself why they keep on asking me the same question, not everything that is tasty has to be sweet too! My mother-in-law became sad and she left… Something is wrong. I must have said something silly. I’m looking for my husband. I explain the situation. “Your mother asked if the dessert was sweet and it’s not so I told her that but I think she is sad now” 🙁

And this way I learnt that the word “helwa” has also another meaning: “tasty”… Actually I told them that what they had prepared wasn’t tasty! It’s said to be the worst insult in an Arabic house to tell someone that you don’t like the food. I didn’t do it on purpose. I tried to explain my mistake and I hope they understood that it wasn’t what I meant 😛

When I came back to Poland I signed up for Arabic course to avoid similar mistakes in the future 😉 To defend myself I will remind you that Arabic is a difficult language. How could I know that something tasty has to be sweet at the same time? 😉

I don’t want you to think that we are the only ones who have problems with Arabic. I will also tell you what is difficult for native Arabic speakers in other languages.

The most common mistakes are when it comes to recognising the letter: “b” and “p” because in Arabic there is only a letter ”b”. Native Arabic speakers often can’t distinguish these letters in a foreign language. Once we went to a restaurant. The waiter wanted to show us that he could speak English. He was doing pretty well until he came to bring us the bill saying: „Here is your pill”. Pill? Pill? Did I mention that I had a headache? Ah! He meant „bill”! He’s just brought the bill! 😀

After we moved to Poland, my husband signed up for Polish classes. After one of the first lessons I asked him:

– What did you learn today?

– Ah you know, we talked about ‘piernik’ (gingerbread).

– Gingerbread? But this is the beginning of the course, how can you learn so difficult words related to food now?

– No it wasn’t about food, but we talked about piernik (gingerbread)!

I opened his book. There was nothing about piernik (gingerbread). They just talked about one of the cases in Polish grammar called: biernik!