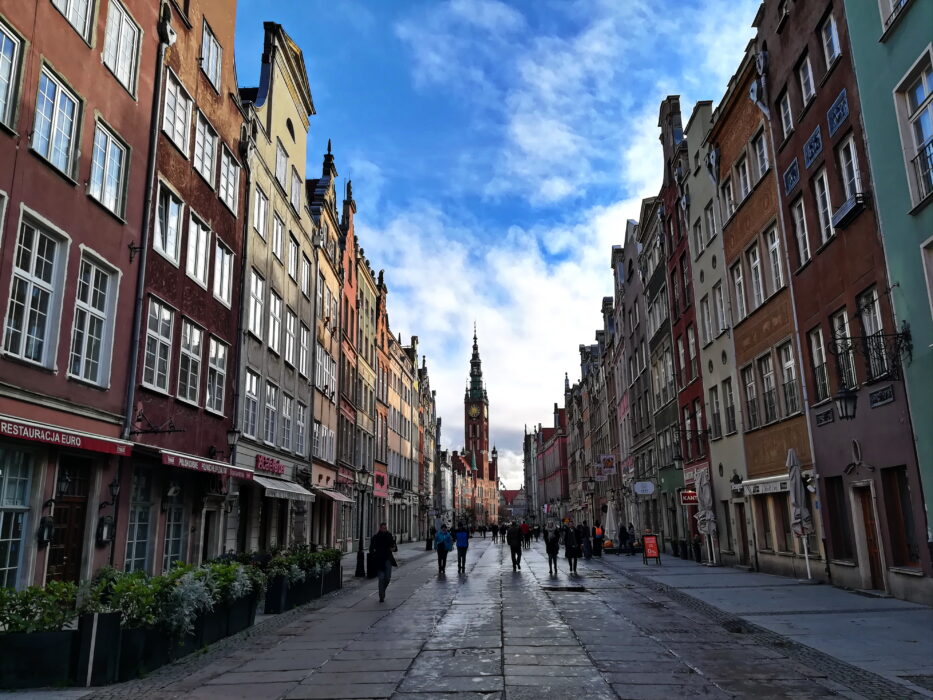 Gdańsk for weekend – what to see in 3 days

By: polegytravels
In: Poland, Travels
Tagged: travelling by car

I went to Gdańsk many years ago when I was a child. In November last year we visited this city together for the first time. We were looking for an interesting place to spend a weekend and finally we chose Gdańsk. I have to say we couldn’t choose better! There weren’t many tourists, the weather was lovely and Gdańsk is just marvelous. What else do we need? 😉

If you are looking for an idea for a weekend, I highly recommend you go to Gdańsk and Malbork. Below I will present you a plan for 3 days trip.

We have around 4 hours’ drive to Gdańsk. The first day we spend on the way and we stop for few hours in Malbork. We love visiting castles so it was high time to see one of the biggest castles of medieval Europe. Its construction started at the end of 13th century and ended in the middle of the 15th century. Until now it’s very well preserved.

We left the car on the parking and went to the ticket office. It turned out that due to the system issue, tickets are not sold and the entry is free. We visit the castle without a guide but it still takes us more than 3 hours to see everything.

At the beginning we go to the courtyard of the Middle Castle with the Great Refectory and Palace of the Grand Masters. Then we pass to the High Castle separated with a wall and a moat from the rest of the buildings. We go into several rooms to see reconstructed dining room, furniture and armaments. Later we see an exposition of the history of the castle and enter a chapel. We walk through the courtyard surrounded with cloisters; we go into narrow passages, up the stairs and we enter each room. The sightseeing is over when we realize that it’s almost 4 p.m. and the castle will be closed soon.

At the end of the visit in Malbork we drive to the other side of the Nogat river to see the whole castle. It’s just impressive!

We start sightseeing in Gdańsk the next day early in the morning. At first we go to the Main City in the center. The weather is just lovely so we enjoy the walk. Firstly we pass by the Golden Gate and following the Długa street we get to the Town Hall and Neptune’s Fountain. The fountain is located in front of the Artus Court, it was built in 17th century and now it’s a symbol of the city.

We pass Długi Targ and get to the Green Gate. It’s probably the oldest gate in Gdańsk. First information about it date back to 14th century although the actual gate was constructed in 1568. It’s time for a walk by Motława river. The architecture in Gdańsk is really impressive, especially the tenements by the river. Main City is full of colourful tenements. There is also another important monument next to the river, Crane. It’s one of the gates and at the same time an old container crane. The interesting thing is that it’s the oldest and the biggest preserved crane of medieval Europe.

We spend the afternoon in the Museum of the Second World War. It opened in March 2017 and I have to say that it already impresses from the outside. It’s located in a building inclined at an angle of 56°.

In the museum there is permanent and temporal exposition. When we went there we saw a temporal one about Westerplatte. It took us more than 3 hours to see the permanent exposition and we didn’t manage to see everything. I have to say that my first impression was very positive. The museum is huge, it contains many rooms which step by step, present the history of the Second World War. What’s important, the exhibits are not only related to Poland, but to all countries taking part in the conflict.

There are also many reconstructions which make the museum more interesting. You can see how streets looked like before the war and how it was destroyed afterwards. The museum is also full of interactive resources. In many rooms you can watch footages, interviews with people who survived the war or listen to the letter written by Polish soldiers to their families. Many exhibits were gathered in the museum and presented in an interesting way. If you haven’t been to the Museum of the Second World War yet, you should definitely go. I will go there again for sure if I have a chance.

After visiting the museum, there is nothing else we can do but walk by the city at night. The part by the river looks lovely with its lights. It’s a perfect place for night photography. Gdańsk looks really amazing at night.

The name of the peninsula has German origin and it means “western island”. In September 1939 Westerplatte became a symbol of Polish resistance to the German invasion. A garrison of Polish army defended the peninsula for 7 days. Nowadays, you can still see barracks, guardhouses, small cemetery of the defenders of Westerplatte and a Memorial to the Defenders of the Coast. It’s a good place to spend few hours when the weather is nice and there are lovely colors of autumn around.

… and back to the center

We couldn’t say no to another walk by Motława, next to the colourful tenements of the Main City. To be honest we loved Gdańsk so much, that if we moved to Poland again and had to choose a place to live, we would be already living in Gdańsk 😉

– parking in the paid zone is free on the weekends
– all the places described (apart from Westerplatte) are close to each other, within a walking distance
– visiting the Museum of the Second World War is free on Tuesdays. The normal ticket costs 23 zł and with a discount 16 zł. There is extra charge of 1 zł per ticket if you want to see a temporary exhibition

How much does a weekend in Gdańsk cost?

Among many hotels in Gdańsk we chose one that cost us around 14 euros per night per person. Hostel Filip 2 has a perfect location, car park and a kitchen we could use to prepare a quick lunch. That’s everything we needed. Apart from that, the stuff is nice and helpful and the price was fair. I really recommend you this place 🙂

If you want to spend a calm weekend and visit something, Gdańsk will be a perfect choice. In November the weather was still nice and there were not many tourists. We walked, visited many places and we had so much rest 🙂